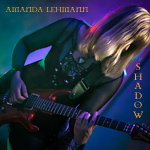 Amanda released her Shadow EP in 2010, which can also be downloaded on the WEBSTORE, or you can check it out on Amanda's You Tube channel, or on streaming (Apple, Amazon, Spotify, etc)

The album by duo Wazzoon (Amanda Lehmann & Eddy Deegan) was originally recorded in 1994. It has now been remastered (2021) and is available from the WEBSTORE.
Song genres include rock, soft-rock, atmospheric, funk, electro, with vocals and guitars from Amanda Lehmann, and synthesizers from Eddy Deegan. 8 great tracks!

Official video for the single 'THE WATCHER' written and performed by Amanda Lehmann. From the new album INNOCENCE and ILLUSION.

Official video for the single 'MEMORY LANE' written and performed by Amanda Lehmann. From the new album INNOCENCE and ILLUSION